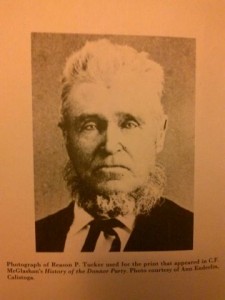 The Tucker Farm Center is named for Reason P. Tucker who made his way to the Napa Valley in 1846 having traveled via a circuitous route across the United States from the east coast. The Tucker’s started moving westward, always looking for the right opportunity to farm their own land and sell their produce, but hardships including the Panic of 1837 kept them forging ahead.

He is perhaps best known for his role in organizing and leading the first (as well as several subsequent expeditions) to rescue stranded members of the Donner Party soon after arriving in California. His widely respected leadership abilities along with his heroics helped to earn him the honorary title of “Captain”.

Mr. Tucker helped settle the Napa Valley by planting wheat fields in the area, he invested in the first quicksilver mine in Napa County, and he was part owner of the first resort, Sam Brannan’s, in Calistoga.

Establishment of the Tucker Farm Center

In 1920 construction had begun on the Farm Center some 200 feet from the school house location where an all volunteer work force labored to complete the building by 1921. Located between Calistoga and St. Helena, the Center was intended as a community meeting place with an emphasis on promoting agriculture and viticulture. Over the years the Center has hosted countless educational farm meetings, 4-H clubs, dances, recitals, plays, fund-raisers, weddings and many other community events.

“On Thursday evening, March 28th at 8 pm, a Farm Center was organized at the Tucker School House, near Calistoga, which will be known as the Tucker Farm Center of the Napa County Farm Bureau. Twenty-six members signed the roll. Several more who were not able to be present have signified their intention of joining.”

Theme by Anders Noren — Up ↑